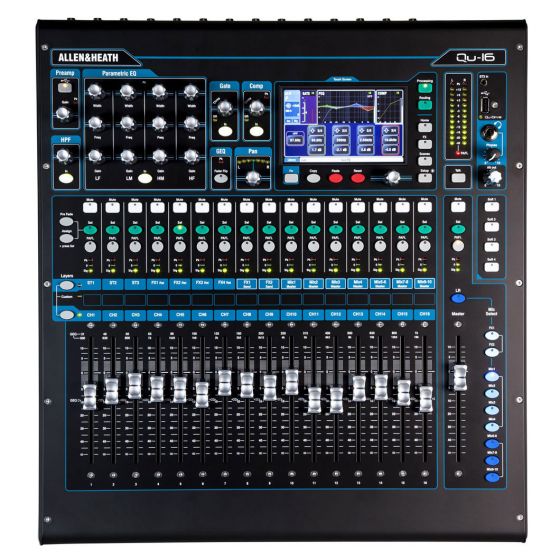 The chrome edition of the Allen & Heath Qu-16C Rackmountable Digital Mixer is a 16-channel digital mixer and USB audio interface designed for live and installed sound as well as studio use. The chrome edition adds high-contrast chrome rotary and fader knobs that improve visibility in dark conditions, as well as a number of software enhancements from the updated firmware (V1.8). It features 16 mic- or line-selectable inputs and 3 stereo line inputs. Its 16 anaLOGIQ microphone preamps have digitally recallable settings that can be saved and recalled for future sessions. The Qu-16 has a variety of output options, including 4 mono XLR mix outputs, 3 XLR stereo-pair mix outputs, an alternative TRS stereo-pair mix output, a TRS stereo-pair 2-track output, and a 2-channel AES digital output.

The Qu-16 has 16 busses as well as 4 stereo effects returns, and offers a variety of routing options and controls. It has a 5" 800x480 resolution touchscreen that displays your metering and RTA views, effects tracks, processing, routing, and saved scenes. The 16 tracks are controllable with the 16 100mm motorized faders. Built-in processing allows you to EQ, compress, gate, switch polarity, and apply delay to all 16 tracks. All of your settings can be saved as a scene and recalled later for quick setup.

Thanks to its internal convertors, the Qu-16 is also a USB audio interface and can record to any Core Audio-compatible software on your Mac. You can also record to and play back audio from an external USB hard drive. It is compatible with the Qu-Pad iPad app that allows you to control your mix with your iPad over a connected wireless network. The Qu-16 unit itself can be rackmounted or set up on a desk.